"We Want to burst this Islamist narrative" 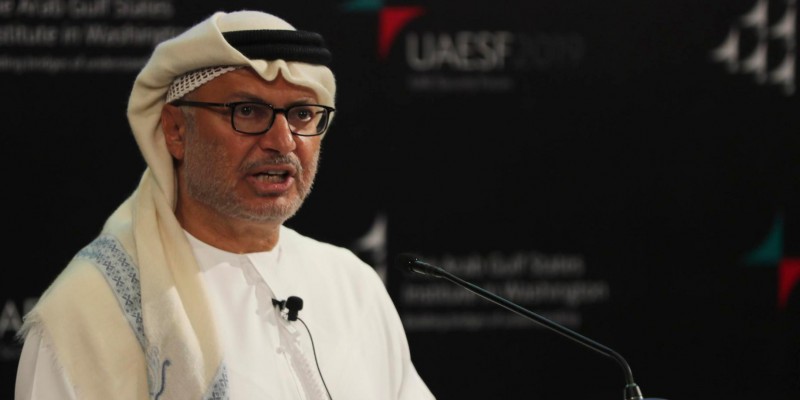 The United Arab Emirates has recently recognized Israel because the country wants to promote tolerance in the Middle East, says Minister of State Anwar Gargash.

How does an Arab experience the struggle for Western values? Such questions are a bit too simple for Anwar Gargash. "In the end, we are all an amalgamation of different cultures and life experiences," says the man who has dressed in a traditional Arab dress for the video interview. His eyes flash amusedly behind the angular black glasses, which would also suit a Berlin hipster.

He remembers well how in 1979 he and his fellow students in Washington sat in front of the television in the university library to follow the latest reports on U.S. diplomats who had been taken hostage by Ayatollah Khomeini's Islamist revolutionaries in Tehran. He recalled his doctoral thesis at Cambridge and the German friend of his family who always claimed to be Danish when abroad.

"And Indian and Chinese influences were also present in Dubai," says Gargash. "In a trading city, you always grow up with many influences. But actually all people are a mixture of different things." This however doesn't mean Anwar Gargash has no opinion. And his opinion counts for something, because Gargash is the Foreign Minister of the United Arab Emirates, a state with one million citizens and nine million inhabitants that is unmistakably engaged in world politics.

When the Emirates announced in August that they would establish diplomatic relations with Israel, it was a sensation in many respects. Only two Arab states had previously recognized Israel, Egypt in 1979, and Jordan in 1994, breaking the rule declared by the Arab League that there could be no normal relations with Israel until the country withdrew from the occupied territories and a Palestinian state was established.

The Emirates' example can set a precedent in the Arab world. "We wanted to break this cycle of indecision," Gargash says. "Not talking to Israel has now been of no use." Under the agreement, he says, Israel eventually agreed to suspend annexations of parts of the Palestinian territories. The common objective has not been betrayed, he said. "We still share the collective Arab position that calls for a two-state solution and a Palestinian state within the pre-1967 borders," Gargash says.

Peace with Israel, he said, gives the Emirates even better opportunities to do something for the Palestinians. "We can have a better impact on the Israelis if we talk to them than if we don't talk to them." The Emirates' peace deal, he said, is also moving the Palestinians to think about a new strategy. Gargash's dissatisfaction with the Palestinians' stance so far is plain to see. When the first rumors of a peace plan under the auspices of U.S. President Donald Trump's administration emerged, the Palestinians very quickly decided not to negotiate it, Gargash says.

The Emirates, one of the most important financial supporters of the Palestinians for decades, had advised them to be more open. If you are not in the room, no one will listen to you. But that hasn't helped, he said. "By not recognizing Israel, we have given the Palestinian Authority political leverage over the last 25 years. But the Palestinians have done nothing with it. So we're going to get that lever back and try to do better."

But there were more fundamental considerations behind the agreement with Israel, Gargash said. "We also looked at it from the perspective of tolerance. There's this Islamist narrative that excludes others and creates conflict all over the region, and that emerged starting in 1979 - with the war in Afghanistan, the occupation of the Great Mosque of Mecca by fundamentalists, and through the revolution in Iran." Here Gargash is back to his own life experience and how it refracts against today's reality. "Politics shapes how we think and what we believe. We wanted to break that cycle."

One may well ask whether it is this demonstrative idealism alone that drives the Emirates' policy, or rather certain profit expectations. What is certain is that they have also risked something by approaching Israel. At least the wrath of many Arabs. So does Gargash when he comments on the current dispute over terror, freedom of expression and Islam that has unfolded between Europe and the Muslim world since the attacks in France. "As a Muslim, I feel offended by certain cartoons," Gargash says. "But as a thinking person, I see the politics that are being played around this issue. With his attacks against France, Erdogan is manipulating a religious issue for political purposes." The French president's words were deliberately taken out of context, Gargash says.

"You should listen to what Macron really said in his speech. He doesn't want Muslims to be ghettoized in the West, and he's right about that. They should be better integrated into society. The French state has the right to look for ways to find a place for Muslims in France's civil society, and to apply means to counter segregation and militancy." These issues should not be left with the far right, Gargash warns, either that in the West or that within the Muslim world. "Erdogan wants to become the leader of Sunni Islam. That's why he's staging this. But in truth, this is a political project, not a theological one." The Turkish president's real goal, he said, is to expand his country's influence in the Muslim world, which already stretches from the Gulf to the western Mediterranean.

Gargash lists the places where Turkey is currently active: Thousands of Turkish soldiers are fighting the Kurdish militia PKK in northern Iraq; in the north of neighboring Syria, Turkish forces are also in the field along with allied militias; in Libya, Turkish weapons and militias loyal to Turkey from Syria are ensuring the survival of Fayez al-Saraj's National Unity Government. "And everywhere Turkey is expanding at the expense of the Arabs," Gargash says. "That's why we object. If they want to rebuild their empire - be my guest. But not with us."

He says Europe, too, must rise to the challenge posed by Turkey. "Macron is one of the few European politicians who openly oppose Turkey's regional expansion," Gargash said. "Europe needs a united stance toward Turkey. Where Erdogan sees gaps or weaknesses, he exploits that to gain power. Only when red lines are drawn for him he becomes willing to negotiate."

Erdogan's ideological project is inextricably linked to this expansion. It is an Islamist project, Gargash says. "Internationally, Erdogan is spreading the ideology of the Muslim Brotherhood. It is partly his own ideology, but partly an instrument to gain power. It's impossible to separate." The Muslim Brotherhood, the oldest international Islamist federation in the world, wants to establish an ultraconservative religious society through political means. But time and again, they also take violent action. In the so-called Arab Spring, the series of uprisings against Middle Eastern dictatorships beginning in 2011, the Muslim Brotherhood became a central force in many countries.

The international fight against the Muslim Brotherhood is a centerpiece of Emirati foreign policy. Because the pious brothers threaten the monarchical order of rule, some say. The Emirates themselves, on the other hand, point to their society, which is distinctly liberal and pluralistic by Arab standards, and whose values must be defended against the Islamists. They point to the coexistence of cultures, which in principle has also functioned elsewhere in the Middle East for centuries. Critics of the Emirates, however, see this more as a sales argument for a policy of expansion. What does Gargash say to such accusations?

"Yes, we are active in international politics," the foreign minister countered. "But you should understand why we aspire to this role. World politics is undergoing a profound change. The Americans will no longer come to the rescue. We in the Middle East have to take responsibility ourselves." Yet the Emirates has never acted on its own, Gargash stresses, but rather as a partner of NATO in Afghanistan, the Balkans and Libya, for example, as a partner in an international coalition against the terrorist militia Islamic State, and in Yemen alongside Saudi Arabia and other states.

This coalition has been defending Yemen's internationally recognized government against Iran-backed Huthi rebels since 2015, but civilians are suffering terribly from the fighting. The United Nations calls it the greatest humanitarian disaster of our time. "In Yemen, our role was not easy," Gargash says. "We are out of there now. It was an uphill battle and we were heavily criticized." The confrontation with Iran, however, will continue. Its concern over Iran's nuclear program and the activities of Iranian militias in the region links the Emirates and other Gulf Arabs with Israel. Promoting cooperation among America's allies in the region was also part of Donald Trump's strategy of maximum pressure on Iran.

After Trump withdrew from the nuclear agreement with Tehran and reinstated economic sanctions, a spiral of escalation began, which also led to attacks in the Gulf. But if you ask Gargash, it seems questionable whether maximum pressure is still the right path for the Emirates. "These problems need to be solved politically and through negotiations," Gargash says. "After the Covid crisis, we will all be poorer and more exhausted. It would be madness to risk confrontation then. We need de-escalation and a political level of action. That's the way we've always looked at it." U.S. presidential candidate Joe Biden has announced he will rejoin the Iran nuclear deal JCPOA, negotiated during his tenure as vice president, if he wins the election.

"It would be wrong to simply revive the JCPOA," Gargash says. "What we need is a JCPOA++ that also limits Iran's missile program and ends its sponsorship of militias throughout the region." And this time, Gulf Arabs would also have to be part of the agreement. "How are we supposed to support something we had no part in negotiating?" the Minister of State asks. It would be wiser to have the Emirates as a partner, he said. This seems to be the message here, too.