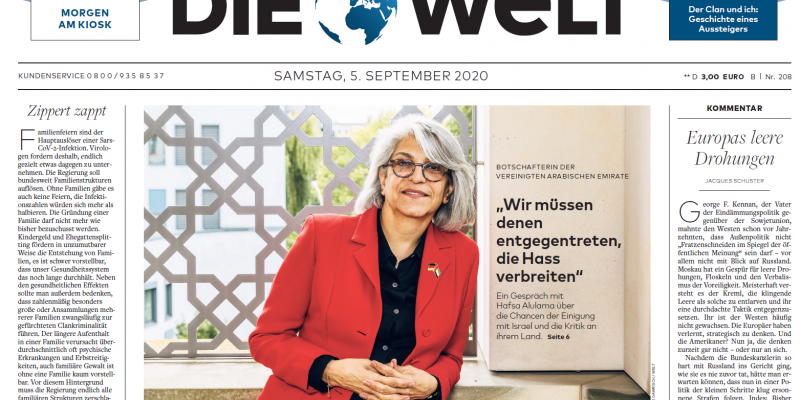 We must encounter hatemongers

It was known that the Emirates and Israel had come closer together. Nevertheless, many were surprised that a peace agreement could be reached so quickly. Why just now?
For us, the issue of tolerance is very important. We have declared last year the Year of Tolerance. This included a visit by Pope Francis to our country and his public service with more than 200,000 believers. We want to build bridges, and for that we must recognise each other. There is a lot of instability in the Middle East at the moment and we can only tackle it if as many actors as possible work together. That is why the time seemed right for a positive signal. We wanted to show that progress is possible in our part of the world.

But so far, the impression was that there was real hatred of Israel in the Arab world.
Sometimes impressions are deceptive. The people in the Arab countries want above all stability, an end to violence, a perspective for their future. Often hatred is deliberately generated by some forces, because without hostility they would lose their livelihoods. Of course, there is a feeling among some in the Arab world that history has not always been fair. But what good is it to remain forever in the past? You in Europe have experienced how much everyone benefits from overcoming old differences. We must think long-term, beyond the noise of day-to-day politics. We are actually good at that. I believe there is such a thing as the wisdom of the desert. After all, that is where the prophets of three world religions came from.

But doesn't peace with Israel have a lot to do with your common opposition to Iran?
Iran was not the reason. But it is true that Iran is a factor of instability in the region. It supports militias in many countries in the Middle East, and the declared aim of the Iranian Revolutionary Guards is to export the Iranian revolution. We want to counter this instability with our peace agreement. We should resolve disputes in the region through negotiation and cooperation. But to do so, we must also counter those who spread hatred and fundamentalism.

Many Palestinians now feel abandoned. In the Arab Peace Initiative of 2002, the Emirates and other countries ruled out peace with Israel as long as there is no Palestinian state. That no longer seems to be the case.
We have by no means abandoned the Palestinians. We have always been one of their main supporters, politically and economically. And we still stand by the Arab League's demands. We continue to demand that the UN resolutions on the issue be implemented and we continue to call for a two-state solution. But we believe that peace is best achieved through dialogue. Not by ignoring the existence of the other. That has simply not worked. Under the new conditions we can support the Palestinians even better. After all, we have managed to get the Israeli government to suspend its plans for annexations in the West Bank. Moreover: we are a sovereign country that makes its own decisions. And this decision is pragmatic and brings enormous opportunities.

What are they?
Israel is famous for its innovation, its technology, its agriculture. They have made the desert to flourish. The whole region could benefit from this. Other Arab states will hopefully follow our example. So that we can create a new narrative about our part of the world - not of war and enmity but of inclusion and innovation. In the Arab world, more than 60 percent of the population is under 35 years of age. These people have had enough of the conflicts in the region. They want a future. Even after oil. Our Crown Prince Mohammed Bin Zayed once said: "I do not want to mourn the day the last barrel of oil is produced - I want to celebrate that day". That is what we think. That is why we need innovation.

Today, Dubai and Abu Dhabi are associated with high-rise buildings with glass facades. What was that like in your childhood?
It is incredible how everything changed. When I was little, we had no electricity. In the middle of the desert. There was little food. Drinking water was delivered to us in barrels every few days, by a man who transported it on the back of his donkey. Of course, there was no air conditioning either. Our house had a wind tower through which cooler air came in. But even then, our founder, Sheikh Zayed, put a lot of energy into education. In the mornings, when we children got on the school bus, our aunts got on it and then learned to read and write at the same school. And in the evening we did homework together, girls and women. At that time the oil began to flow and Sheikh Zayed founded our state investment fund Adia. For every dollar he spent, he saved a dollar. That was the foundation of our wealth.

You made a career in diplomacy, you started your own financial company. Isn't all this even more difficult for women in your part of the world?
Maybe some things would surprise you. Take Sheikh Zayed, for example. He was a real patriarch, the head of his tribe. But he realised that there was no progress if only half the population participated. In our country, government action has indeed made a big difference. In our parliament, 50 percent of the members are women. More than in the Bundestag. We have women in the police, as pilots, in management. And there is a woman at the head of our space agency. Of course, there is resistance to progress among some people in the Arab world. But the best way to counteract this is to have functioning counter examples.

Your country is also very self-confident in foreign policy. But do the Emirates really promote stability when they support the rebel general Khalifa Haftar in Libya in his fight against the internationally recognised government of Fayez al-Sarraj?
Yes, we support stability in Libya. We have been actively involved in the negotiations of the Berlin process, which the German Government started with its conference in January. We also fully support the ceasefire recently negotiated between the parties to the conflict in Libya. But in Libya unfortunately forces like Turkey are interfering, which has even brought mercenaries from Syria to fight there. The Sarraj government does not represent all of Libya and was never elected.

But it was negotiated between the parties to the conflict with the mediation of the United Nations. And, with all due respect, your country sent weapons and money to Haftar even before Turkey intervened.
The problem is that the Sarraj government includes fundamentalist elements that can threaten the security of the whole region. After all, Libya borders on Egypt, a country of 100 million people.

You mean the conservative Muslim Brotherhood, which originates from Egypt and is said to have influence in the Sarraj government.
Correct. This extremist ideology is sowing chaos and violence throughout the Middle East. Egypt and the Emirates have recognised that this is a terrorist threat and have classified the Muslim Brotherhood accordingly. The ideology of the Muslim Brotherhood is characterised by exclusion, it contradicts everything we stand for - coexistence, openness, moderation.

In Europe, some people see the Brotherhood simply as conservative Muslims taking part in democratic competition.
So it may seem. But we in the Middle East know the damage such groups can do. This is not just any party. It lays the foundations for extremism. The ideology of Isis, too, ultimately stems from the thinking of the Muslim Brotherhood, which can be found in their writings - the principle that every dissident must be fought as an enemy. That determines all their actions, even if they appear modern and ready to talk to the outside world.

You mentioned the Berlin peace process for Libya. Should Germany also play a more active role in the Middle East in other respects?
Yes. Germany and Europe as a whole. They have so much to offer our region. The Emirates and Germany are so similar in so many ways. We both focus on innovation and cooperation. It is courageous how Germany is facing up to its past. It is an economic superpower and plays a central role in Europe. And as Europeans, the Middle East is your immediate neighbour. Germany can do a lot of positive things there. That would also combat the causes of migration. We see Germany as a potentially very important player in our region. As a positive role model in many areas.