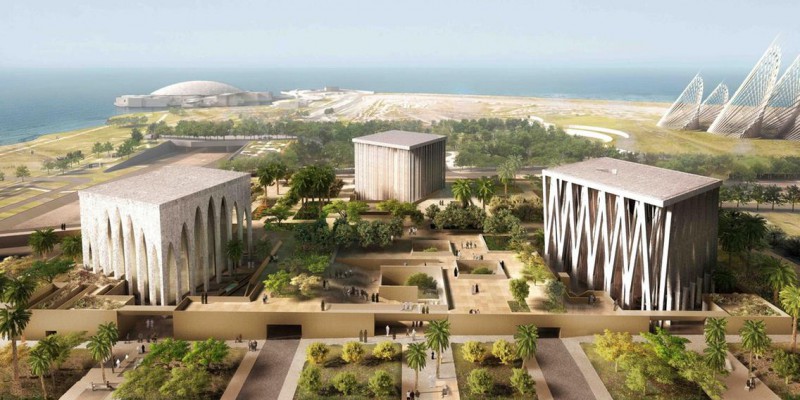 First published by the Permanent Mission of the United Arab Emirates to the United Nations.

The Abrahamic Family House, a Symbol of Religious Inclusion

Inspired by the visit of Pope Francis to the UAE in 2019 the Abrahamic Family House in Abu Dhabi will serve as a global beacon of religious tolerance, co-existence, and inclusion. This project of religious inclusion and interfaith dialogue was announced at a time when religious communities around the world were reeling from horrific attacks on houses of worship – the shootings at the Tree of Life Synagogue in Pittsburgh, Pennsylvania, and the Al Noor Mosque and Linwood Islamic Centre in Christchurch, New Zealand.

With more than 200 nationalities and over 9,000 mosques and musallas, dozens of Christian churches, two Hindu temples, a Jewish synagogue, a Sikh temple, and a Buddhist monastery, the UAE embraces a tradition of diversity and inclusion. Even before the founding of the federation in 1971, leaders of the UAE sought to nurture a culture of religious inclusion. In 1965, St. Joseph’s Catholic Church opened in Abu Dhabi, followed closely by St. Andrew’s Anglican Church, which opened in 1968.

“The one country in the world, in that moment of violence against the sacred, to announce that it was going to build a complex which understood sacredness in inclusive terms, that emphasized sacredness as the magic that happens when you bring people together…knocked me over.”

Since then dozens of different houses of worship have come to call the UAE home, including the Church of Jesus Christ of Latter-day Saints, which announced in April 2020 its plan to build a temple in the UAE, its first in the Middle East. What is arguably the most impressive demonstration of interfaith participation in the country is set to open in 2022, the Abrahamic Family House.

The inspiration for the Abrahamic Family House – a complex of houses of worship for the three Abrahamic religions: Islam, Christianity, and Judaism – came after the signing of the Document on Human Fraternity for World Peace and Living Together by His Holiness Pope Francis and His Eminence Dr. Ahmed El-Tayeb, the Grand Imam of Al-Azhar, in February 2019. The visit by Pope Francis to the Arabian Peninsula was the first ever by the head of the Roman Catholic Church, a testament to the concerted efforts by the UAE to advance religious inclusion.

During his trip, Pope Francis met with the Muslim Council of Elders at Sheikh Zayed Grand Mosque, signed the Human Fraternity Document, and held mass for 180,000 people in Abu Dhabi.

The visit by Pope Francis in 2019 coincided with what His Highness Sheikh Khalifa bin Zayed Al Nahyan, President of the UAE, declared as “The Year of Tolerance” – a year to champion the UAE as a hub for religious and cultural inclusion and tolerance, and to underscore these values as universal concepts that create peaceful societies. The announcement of the Abrahamic Family House is, in part, a demonstration of that vision.

“The Pope’s visit [sends] a strong signal across the region and world: People with different beliefs can live, work, and worship together.”

The Abrahamic Family House, to be built on Saadiyat Island in Abu Dhabi, includes three houses of worship and an education center. Designed by the renowned architectural firm Adjaye Associates, the synagogue, mosque, and church, while distinct, are aligned and unified through each silhouette and connected by a common garden. The video rendering at the end of this article illustrates how each structure retains unique elements of the faith it represents but also embraces the look and feel of its sister houses of worship.

“I saw the garden as a powerful metaphor, this safe space where community, connection and civility combine—this space exists between the three chambers, the three faiths. The podium allows you to interact with each space, there’s no preventative threshold, and this way you dissolve the perceptions of not being included and encourage the celebration of this collective history and collective identity.”

One example of that is not only the size, but the diversity of the Christian community in the UAE. The UAE is home to more than 40 centers of Christian worship, the largest number by far in the Arabian Peninsula. Reverend Andrew Thompson, the Vicar of St. Andrew’s Church estimates that “between 10 and 15,000 worshipers come to the compound each week,” including Ethiopian Orthodox Christians, Indian Pentecostal Christians, Greek Orthodox, Syrian Orthodox, Armenian Catholics, and Anglicans – to name a few.

“It’s been an extraordinary journey looking at how an Islamic nation is wholeheartedly embracing the concept of tolerance…to experience an Islamic nation [that] not only permits for church to exist, but actively promotes it, is just an incredible experience.”

Rabbi Yehuda Sarna echoes a similar sentiment about what the Abrahamic Family House represents in the context of religious inclusion, not only in the UAE but around the world: “In my mind it was a mark of global leadership in the face of hate. In the most dramatic of ways, in the most permanent of ways, in the most ambitious of ways.”

“In a way, almost every sacred site has been defined in the past by conflict, and the idea of having a sacred place, an interconnected sacred place, to be that very site is nothing short of visionary.”

-          RABBI YEHUDA SARNA, CHIEF RABBI OF THE JEWISH COMMUNITY OF THE EMIRATES

The Abrahamic Family House, in conjunction with the recently signed Abraham Accords, signifies the UAE’s commitment to promote compassion and tolerance among all people. These efforts again reflect not only the principle of inclusion, but the action of inclusion. Rabbi Sarna believes that these efforts represent the process of a “family reunion.”

The choreography of this global reconciliation of Islam, Judaism, and Christianity needed a venue. In the announcement of the Abrahamic Family House, Rabbi Sarna believes that will soon exist.

Advancing inclusion and encouraging religious tolerance and diversity are key tenets of the UAE’s candidacy for a seat on the Security Council in 2022-2023. If elected, the UAE will also work on the Council to promote the values of compassion, co-existence, tolerance, and diversity among peoples, as well as understanding between religions and cultures. Spreading these values is crucial to the maintenance of international peace and security.